At the beginning of the year, we launched our GEM Award initiative and began a search to find young people in Sussex who, like us, pride themselves on going the extra mile and deserved to be awarded for their achievements.
From all the fantastic nominations we received – and we were extremely impressed with all of them – we chose Chichester High School sixth form student Joss Edwards as the winner due to the contribution he makes not only to his school, but also his local community.
Joss devotes a considerable amount of his free time to volunteering for PASCO, a Chichester based charity which supports children with disabilities and special educational needs, where he works as a personal assistant to young people with severe autism.  Additionally, as Head Boy he runs the School Council along with the Head Girl and is leading the council's Mission 5K project by organising a number of fundraising events with the aim of raising £5,000 for three local charities. 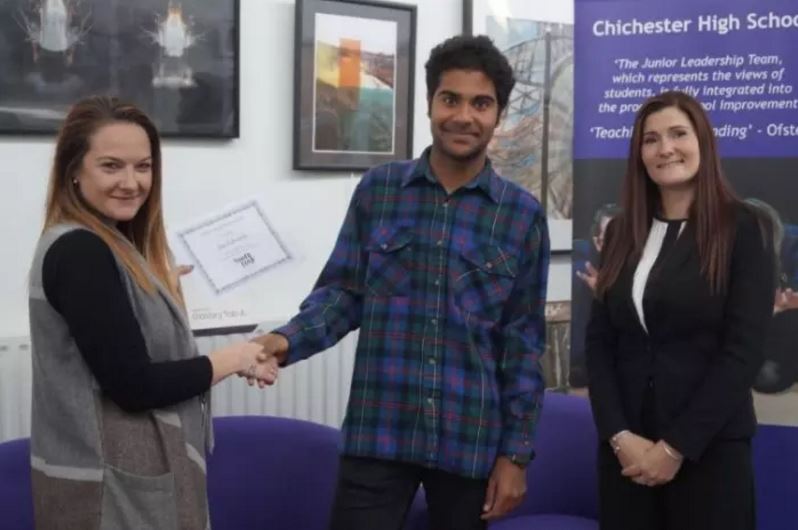 Victoria Smith, Vice Principal at Chichester High School, nominated Joss to receive the award.  She said, "Joss is an outstanding role model to all students and we're all delighted he has received a GEM Award. As well as spending time helping others, he is also a hard-working, intelligent and high achieving student. Due to his innovative ideas, likeable personality and determination, the Sixth Form is the strongest it's ever been.  Joss has been accepted at a university in Canada where he will continue to study Geography and will be greatly missed by everyone at the school."
Jade, who is responsible for our HR and customer relations, went to meet Joss and was delighted to present him with a certificate and Samsung Galaxy Tablet as a prize.  She added, "We pride ourselves on going above and beyond for our customers so launched the GEM Award to find young people in Sussex who, like us, go the extra mile. We received some fantastic nominations, but were extremely impressed with the fundraising Joss does in the school and the work he does while volunteering. Huge congratulations to him."
Well done Joss, keep up the good work!

Supporting our NHS
South Link are proud to continue their support of our NHS.

South Link are Pall-Ex Shareholders
South Link is pleased to announce that we are now shareholders in the logistics network, Pall-Ex.